You can play pickleball indoor and outdoor, for all ages. Everyone is welcome!

From half of September Amsterdam is playing indoor again!

From half of September till May there are several spots we play inside. Below there is detailed information about when and where to play. In the summer we play outside at tennisclub Linnaeushof and ‘guerillastyle’ at cafe The Pacific in Westerpark.

At all our spots you can join with or without partner and it doesn’t matter if you are a beginner or more experienced. For people who take their first pickleball steps always a beginners clinic will be offered. First time is for free and materials like paddles, balls and net will be provided, just bring sportshoes. Come and discover this fun new sport!

If you have questions, please send an email: amsterdam@pickleballholland.nl 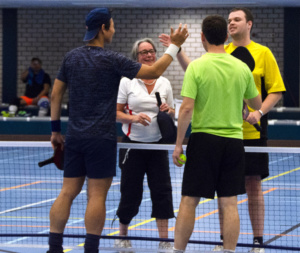 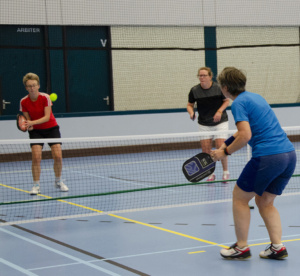 The indoorseason runs from half of September till the end of May. We play five times a week at different locations. We hope to see you somewhere somehow! You can always drop by and try it, first time is for free. If you like it, later on you can decide whether you want to buy separate passes, a ticket strip or season pass (you can pay cash or by whatsapp-request). 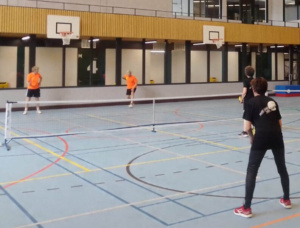 Our most beautiful sports facility is located in de Pijp, recently renovated equipped with a nice new floor. Since 2015 we play there on Sunday afternoon and we have 6 courts at our disposal.

The group exists of 16 to 20 people, the level varies from 2.5 to 4.0. Everybody is welcome, young and old. You are very welcome to join us.

The first half hour we will practise and do exercises (voluntarily) and after that there is free play. Paddles, nets and balls are provided. 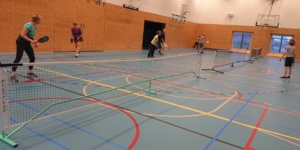 This modern built high school hosts a very roomy gymnasium with nice floor and woodwork on the third floor. We have three to six courts to play on. Everyone is welcome, but that said this Saturday afternoon is especially interesting for beginners. We start with some basic drills. Also more experienced players help you to understand the rules of the game. Paddles, balls and nets are provided. First time is for free! In May we can’t play due to examinations.

This season we play for the first time in sportshall Wethouder Verheij, als part of an open play for seniors, organized by the county. Would you like to start exercising again and you like a racket sport, this is a good way and place to start. We have two pickleball courts at our disposal. This pilot runs till 25th of November, afterwards it will be decided whether we continue playing in another sports facility. 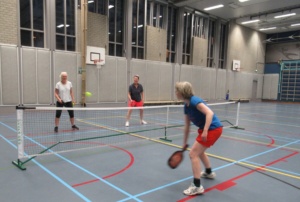 Since last year we started playing in this very local primary school in the Kinkerbuurt. About 10 persons play for one and a half hours at three courts maximum. All levels are presented, everyone is welcome.

We start with 20 minutes of working on our technic and do some drills (voluntarily). Afterwards there is free play.

First time is for free, join us to check it out! 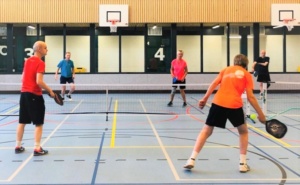 On Thursday at 8 pm there is open play, no membership is required. Several sports are accommodated like badminton, volleybal, tabletennis and of course pickleball! There will be 2 up to 3 pickleball courts available. Before, at 7 pm, a fitnesstraining is offered by a professional trainer. Using the slogan ‘do whatever you can’ you can improve your shape. This evening is hosted by Combiwel.

Playing outside during the summer

This summer we had so much fun playing outside at tennisclub Linnaeushof. This club exists of 3 tenniscourts located within a neighboorhood in the East of Amsterdam. In the backpart on one tenniscourt there are lines drawn for four pickleball courts. More than 70 people found their way to this ‘hood’ and they came from everywhere: Dutch cities like Lelystad, Hilversum, Den Haag and Alkmaar. But also Illinois, Spokane – Washington, New York, Naples – Florida, California, Hawai, UK and Canada. And yes also Amsterdam! This succesfull pilot will be continued next summer.

During the summer we also played ‘guerillastyle’, setting up two temporary courts at cafe the Pacific in Westerpark. To play of course and also to promote pickleball a bit more. People passing by could join and discover pickleball! 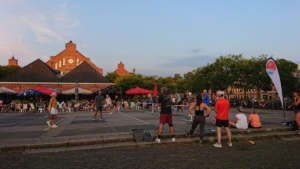 All the revenues from season passes, ticket strips and separate passes are used for the growth of pickleball in Amsterdam. The foundation Amsterdam Pickleball Players is solely run by volunteers. With the revenues the rent of locations is paid, materials are bought and once a year the Amsterdam Open is organized.

Payments can be made in cash, by app request (via Jiske) or you can transfer it yourself. During the season it is still possible to buy a season pass, a discount for the time passed will be applied. Also it is possible to pay in terms.

Thank you very much! 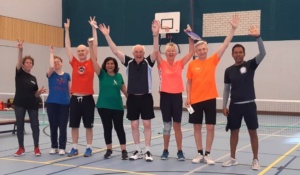